States that want to opt out of the Common Core Learning Standards (CCLS) and/or the tests aligned to or based on its standards are being threatened by a toothless tiger that doesn’t want the states to know the tiger has no claws.

States are hearing, “It’s too late to back out”; “You’ll waste all the money you’ve spent on implementing the [low-level Common Core] standards your state board of education adopted three years ago”; “You’ll waste all the money you’ve spent on [self-described] Common Core consultants who have given [very costly] professional development to your teachers and told them what to change in their classroom curriculum to address Common Core”; “You will have to pay back all the money you got under Race to the Top (RttT)”; or, “You will lose your waiver and not get your Title I money.”

Can the U.S. Department of Education (USED) demand repayment from states that got RttT funds? Can it withhold Title I money from a state that loses its waiver? It is important to recall that Congress didn’t pass legislation requiring Common Core’s standards or tests. All it authorized in 2001 was a re-authorization of the Elementary and Secondary Education Act (ESEA) called No Child Left Behind (NCLB). ESEA hasn’t been re-authorized since then, so there are no new or different education policies passed by Congress. A variety of conditions have been attached to the recent waivers issued by USED, but they may have no constitutional legitimacy since Congress didn’t approve them. States can certainly raise that objection.

At the national level:

If a state received RttT money and spent it, it most likely doesn’t have to pay it back if it now seeks to opt out of using Common Core’s standards (by any name) and any tests aligned to or based on these standards. Neither the RttT application nor the grant award from USED contained a repayment penalty for withdrawing from a commitment. Moreover, the Grant Award Notification from USED implied withholding of future RttT funds, not repayment of RttT funds already expended.

In other words, there seem to be no likely penalties if a state accepted a USED award of RttT funds and now chooses to withdraw from the agreement. States can justify their withdrawal on the grounds that the Common Core standards do not meet the original requirements of “common standards” outlined in the RttT application. These standards were supposed to be “supported by evidence that they are internationally benchmarked.” But they are not. The Common Core Validation Committee never received any evidence.

Nor has evidence been provided by two post hoc attempts to provide such evidence: the 2011 report by David Conley at the University of Oregon and the 2012 report by William Schmidt and a colleague at Michigan State University, Richard Houang. Conley’s report, funded by the Gates Foundation, contradicted the findings in his 2003 pre-Common Core report on college-readiness standards, while Schmidt and Houang’s report has been severely criticized on methodological grounds. It is unclear who funded it.

Moreover, RttT was a three-year program extended to last four years. It expires in the fall of 2014. Whatever changes states make after 2014 cannot affect the grant. In addition, no state committed itself explicitly to maintain forever the new policies required by RttT. Once RttT grants expire, it is unclear how the USED could demand repayment for an expired program.

If a state obtained a waiver from some aspects of No Child Left Behind (NCLB) and now seeks to opt out of using Common Core’s standards and tests aligned to or based on them, it is highly unlikely to lose Title I money. Title I is implicated in the Common Core issue only because the state committed to the CCLS to obtain the waiver.

If the state applies for an extension of the waiver through the 2015-2016 school year, it would need to replace its commitment to implement the Common Core with a commitment to implement alternative standards approved by its institutions of higher education (IHEs). IHE approval of more demanding “college- and career-ready” standards would allow the state to retain the waiver, without penalty. Legislators need to ask their public IHEs to approve standards that enable mathematically and scientifically ambitious high school students to take STEM-preparatory coursework while in high school, not in transition courses elsewhere after high school graduation or after passing a GED test.

If the US Department of Education (USED) decided to be punitive, it could withhold at most only 5%-10% of the 1% of Title I funds set aside for state administrative functions. For example, if a state received $200 million under Title I, the administrative set-aside is $2 million. The most severe federal punishment would be 5-10% of that, or a maximum of $200K.

If the state chose to give up its waiver, the state would be under the NCLB mandate again to get all students to proficiency by 2014. NCLB has a range of sanctions for persistently failing schools and districts, ranging from conversion to charter schools, closing the school down altogether, replacing a large percentage of the school’s staff, to carrying out turnaround plans. If states give up their USED waivers from NCLB requirements, they would still have to assess their state’s standards annually with tests that, by law, must be based on these standards, and NCLB’s sanctions would again apply for failing schools and districts. It is not clear what the sanction would be for failing to get all students to proficiency by 2014, that is, if most schools failed to achieve Adequate Yearly Progress (AYP) for all subgroups.

The primary financial consequence of relinquishing the waiver would involve flexibility, not amount, of funding. Under NCLB, failing schools must allocate 20% of their Title I funding to Supplemental Education Services, typically outside tutoring. The waiver doesn’t change the amount of funding those schools receive but allows them to redirect 20% of it to other Title I uses. These districts would lose flexibility, not money.

USED would find it politically difficult to impose financial penalties on waiver cancellation when Common Core is not, in theory, a federal program. Or so we are regularly told.

At the state level:

Districts can select their own curricula and, in some states, their own standards. What they cannot do easily is avoid state testing. State tests operate under state laws which force all districts to participate, although sanctions vary by state. Typically, the results of these tests are used to rank or grade schools publicly, and they serve to label the schools as meeting or not meeting NCLB’s requirement of proficiency. 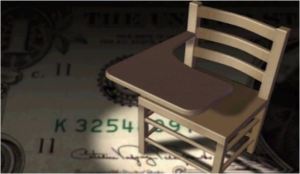 A future post will further address districts that want better standards and tests than their state board and department of education are imposing on them.